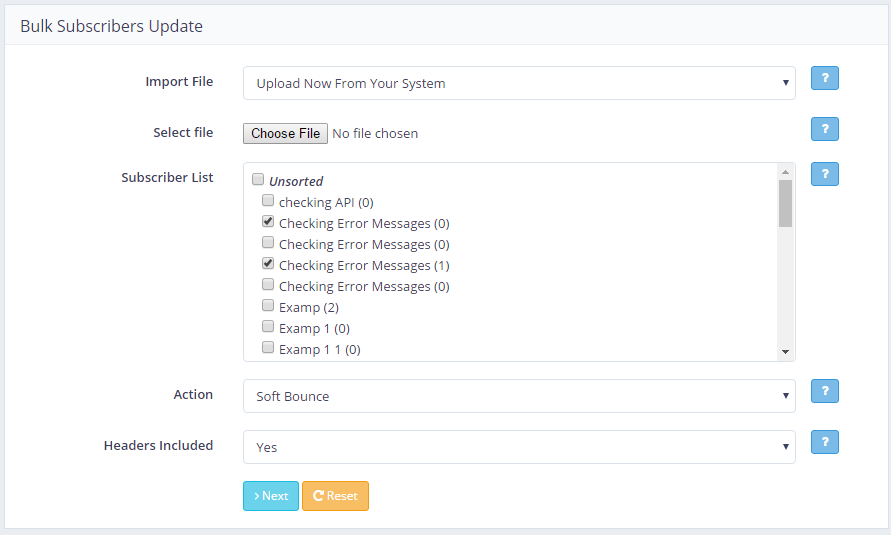 The process of updating subscriber status involves importing of a file, or selected an already uploaded file via FTP in import_file folder. The selected file should contain the records to update the particular contacts’ status within the list(s) that you will select in the next step.

If the first option to import the file from the system has been selected, a button to "Choose File" will appear (Default Option). However, dropdown will appear if you have selected the second option to “Select From Files Uploaded to import_file Folder”. This will show all the files import_file folder contains for you to select the desired one to continue.

Select one or multiple list(s) to update the status of subscribers within the selected lists. Make sure that this particular function is specific to only updating the subscriber status in bulk, rather than importing the new subscribers to the list(s). Therefore, in order to have their status updated, the selected list(s) should contain the contacts exist in the importing file. For adding contacts in bulk, we use separate function that has already been discussed in "Import Subscribers"

Select one of the available 4 options in the dropdown to update subscriber status. Four options are the following. The contacts in file imported from the system or exist in the import_file folder, will match the records in the selected list(s) and perform the action that you will select from this dropdown.

It will delete the subscribers across the selected list(s)

Selecting “Yes” from the dropdown will include and read the headers field while importing, and selecting “No” from the dropdown will ignore the headers of the importing file. Upon pressing the "Next" button, the process of updating the subscriber status will start and finish on your screen. Following window appears when the process completes updating the subscriber status.