a) Importing Subscribers from a File

If you have a subscription list in excel or notepad file and you want to get it imported, instead of adding one by one. Then Mumara's answer is yes, you can do it with our Import tool. In left Navigation menu under Subscribers Tab, click on “Import Subscribers from a File” and you’ll be shown the following page. 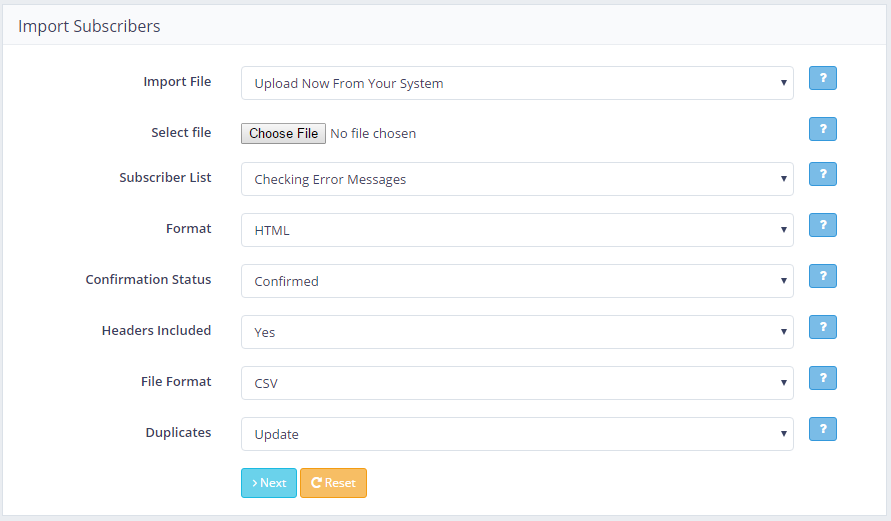 Now there are two options to upload the file before it gets ready for import.

1-      Click on “Choose File” button and select if from your computer.

2-      Upload it via FTP in /import_file folder under your product installation directory.

Note: If there isn’t any folder with the specific name already, then you need to create a folder named “import_file” (without quotes) and give writable permission (chmod 777) to it.

If going with option 2, then select the second option from first dropdown which will allow you to choose from already uploaded files. It will now display another dropdown menu which will contain all uploaded files available for import. Select your file which you want to import -> Select Subscriber List where you want all subscribers within the uploaded list to get imported -> Select the format -> Select Status as unconfirmed (if not already confirmed) and press Start Import.

On the next screen, Mumara reads the headers of your file and displays separately along with database fields for the selected subscription list in drop down. For example, have a look on the figure below. 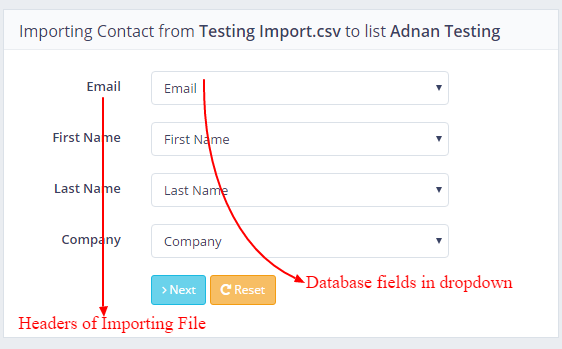 In the above mentioned instance, we have tried to import a CSV file containing four columns with headers i.e. Email Address, First Name, Last Name, and Company. So in this step Mumara displays the headers of the file and besides the header of the file, shows the database fields in the dropdown list against every column's header. Map the correct fields for every column. Have a look on the figure below for a better idea of how it looks? 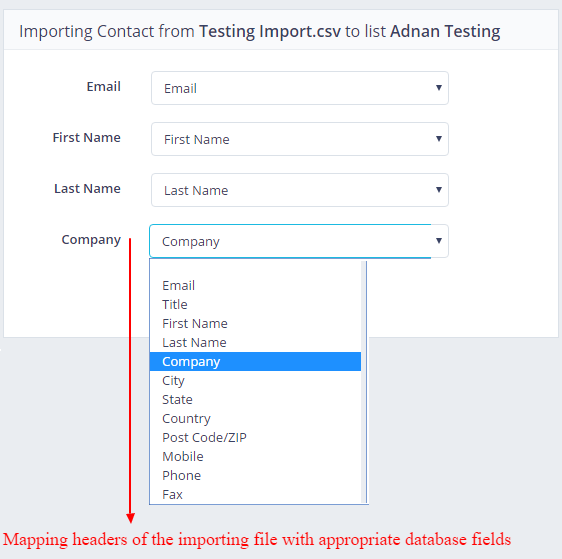 Once you choose your correct fields for correct headers, you can proceed to import the subscriber’s details from the file to a list. Click on NEXT button to start import. The figure below shows how it looks while your data is getting imported into the selected list.

This function reads your file and count total number of subscribers/rows inside. This function isn’t responsible for performing any query other than reading the file.

b) Filtering the file and getting ready to import

During this function, Mumara copies your data to a temporary table to make it available for filtration. Filtration would include removing duplicates and invalid emails from the imported list.

It removes the duplicate entries/emails from the imported list.

This function removes all invalid emails. Invalid emails are those which have invalid format or doesn’t look like an email address.

Once the duplicates and invalid emails have been removed from the list you just imported, Mumara starts the actual import from the temporary table to the actual table and your list gets ready to be used.

All of the above features are using advanced techniques and highly optimized queries, which make the things, go real fast. It also involves some technical optimization in your server libraries which you can look in our support desk.

Note: Just CSV or TXT format works with this import.