Select one of the lists during the first step of scheduling an email campaign and proceed to the 2nd step to select the “Type” of campaign. MUMARA offers selection of the three campaign types as discussed in “Schedule an Email Campaign”. For both “Custom Campaign” and “Adnowledge Campaign”, you will have the ability to select more than one campaigns or ADK campaign IDs to schedule.

When you schedule the kind of campaign in which multiple emails/ADK IDs are selected to send to the subscribers of one email list, application applies cyclic rotation. Following example further explains that how actually this combination of multiple campaigns for one list works?

After the selected number of campaigns (3) finish their first cycle, the process repeats it course from subscriber number 4 who will receive the first campaign.

b)      Sending One Campaign to Multiple Lists

You can send to multiple lists by ticking the boxes with names of the lists during first step in the process of scheduling a new campaign. Move forward by clicking next. You can select one of the three available campaign types, a) custom b) Adknowledge and c) split test. The selected campaign will be sent by following the sequence of the list creation date. The subscribers in the list created earlier will first receive the campaign, followed by the list created later.

You might have reached third step “SMTP”, by selecting multiple lists and multiple campaigns during the course of completing first and second step. It may confuse that will this selection work or not? All other contemporary sending applications don’t facilitate with this kind of sending. But with MUMARA this selection is perfectly appropriate for sending.

One may think that the process will take enough time to complete, especially for a larger list having thousands of subscribers. But in case of more than 200 subscribers in one send, MUMARA automatically breaks the number of subscribers into batches for fast sending.

Application will send this email campaign to the subscriber of selected list by spinning the selected campaigns in cyclic rotation, cyclic rotation has been discussed above. For the SMTPs, application will divide the number of subscribers in the list on the number of selected SMTPs to create subscriber batches. In result of division, first batch will receive the campaign using first SMTP account, and the next batch will receive the campaign using the next one.
More on Creating SMTP Account
More on Creating Email Campaign

Application will separate out one of the selected list(s), and will start sending campaigns by following the cyclic rotation. If the subscribers in the list exceed from 200, application automatically creates sending batches. Each batch will take 200 subscribers to work with in the first instance, and the next 200 after completing to the first ones.

Domain selection has already been discussed before, while explaining the 3rd step of the process of scheduling an email campaign. You can mask the domain of current installation/ local domain with a masking domain setup in the selected SMTP.

Or you can also select more than one masking domains with the help of “Custom Selection” the third option to select a sending domain.  See the following Figure#4.6.1. If you select multiple sending domains, the application will follow the same pattern of rotating the selected domains in the cycle, cyclic rotation has been discussed various times. 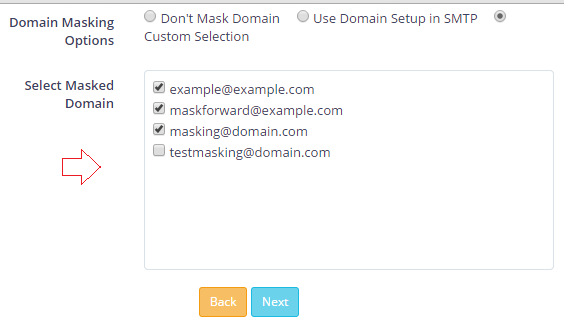