Admin of the application is being given this ability to monitor the queue of the SMS braodcasts scheduled by its clients. It gives an ability to monitor campaign processing in the real time, a proactive approach to keep a watch on campaigns getting unexpected failure rate, campaigns that was being paused and the broadcasts active in the queue.

Serial number is the set pattern that every table across the application follows. It shows the serial number of records in the table.

Name of the client who used his/her account to schedule specific campaign.

Campaigns are always scheduled under certain schedule label, and the label is filled as first mandatory field during the scheduling of the campaign. So the client scheduled this campaign under that specific schedule label.

The status will be one of the following.

In-Process while the application is in the process of sending of the campaign.

Finished, when application finished sending the campaign client has scheduled.

The status will remain “Scheduled” for the campaigns that client has set for the later date and time, until the scheduled time approaches and system starts sending to them.

Paused is the status, when you have paused specific campaign, and Resume when you Resume the paused campaign.

Specific campaign was last updated on this specific date and time

If the system has finished sending of the particular campaign, it will accurately calculate and reveal the time it took to complete the process of sending.

Total number contacts to which the campaign was scheduled for.

The system has processed these numbers of contacts out of the total scheduled. In normal circumstances system successfully processes all the contacts for which the campaign is scheduled for, with exception of few cases when an error occurs on any stage of processing.

Number of contacts to which the campaign was failed to get delivered.

Number of contacts to which the campaign has successfully been sent.

The only action you can choose to perform under the action column is "Delete" specific broadcast from the queue. If admin deletes a broadcast, it will also get deleted from the client account it belongs to. You can't delete a campaign in progress however. 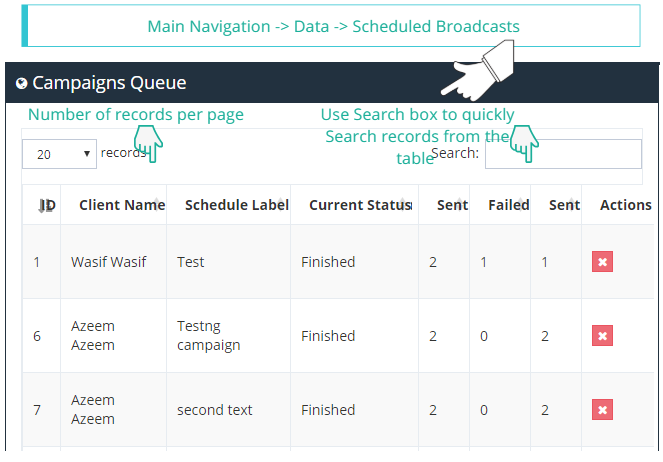